The complete archival collection of famed bestselling New Orleans author Anne Rice is now open by appointment to the general public and campus community for research through the Tulane University Special Collections (TUSC), a division of Tulane University Libraries.

The collection was created and managed by three authors – Rice, her husband Stan Rice and her sister Alice Borchardt – and documents their professional development. Tulane’s Howard-Tilton Memorial Library acquired Rice’s complete archives two years ago, thanks to a gift from Stuart Rose and the Stuart Rose Family Foundation.

Rice’s collection encompasses one of the largest manuscript collections at Tulane Libraries and illustrates her immersion in and engagement with the culture of New Orleans from a young age. These materials contain hundreds of handwritten and typescript drafts of novels and poetry along with professional correspondence with publishers.

“Anne Rice's archival collection continually illustrates that the legacy of New Orleans' culture is far-reaching and emotionally resonant for many fans, scholars and writers across the globe,” said Nix Mendy, library associate for archival processing. “More importantly, it allows us to study and understand how stories surrounding the city are shaped and received by those inside and outside the Gulf Coast region. I believe the local community will be pleased to see themselves reflected in her materials and challenged to think deeply about New Orleans’ significant role nationally and internationally.”

Anne Rice, who passed away in December 2021, wrote 38 novels across eight series, scripts, plays and lyrics for multimedia projects. Her bestselling gothic and supernatural fiction includes The Vampire Chronicles and The Lives of the Mayfair Witches, which have sold millions of copies internationally. Her literary career also encompassed stand-alone historical novels, erotica under pseudonyms (A.N. Roquelaure and Anne Rampling), and fictional accounts of Jesus Christ and angels.

Several early and unfinished works complement completed creative works from Anne and Stan Rice and Borchardt. These include dozens of adaptations, drafting notes, hundreds of drawings, paintings and collages, audio recordings of interviews and public readings (currently undigitized) and records.

Researchers studying Rice may also be interested in viewing Anne Rice’s annotated Bible in TUSC’s Rare Books collection. She used this copy as a reference text while writing her Christ the Lord series and there are several embedded notes and markings.

Perhaps the most substantial area for research would be Rice’s world-building and creative processes. She was a prolific diarist and novelist who not only chronicled her personal life and beliefs but devoted thousands of pages to research, outlines, proposals and drafts. Rice also developed several tools to map out her projects’ plots, settings and visual resonances, including oversized sketchbooks and cardboard cards lists.

Beyond her professional career, researchers will also be able to engage Rice’s personal life and relationships through her diary entries, college records, correspondence and photographs. The collection also features records that highlight how she promoted and adapted her work through various avenues, including a recorded phone line for her fans, guided tours throughout the Garden District and St. Elizabeth’s Orphanage Museum as well as doll production of her main characters.

To learn more about the Anne Rice Collection, visit the digital finding aid, contact Special Collections by email at specialcollections@tulane.edu or call 504-865-5685. 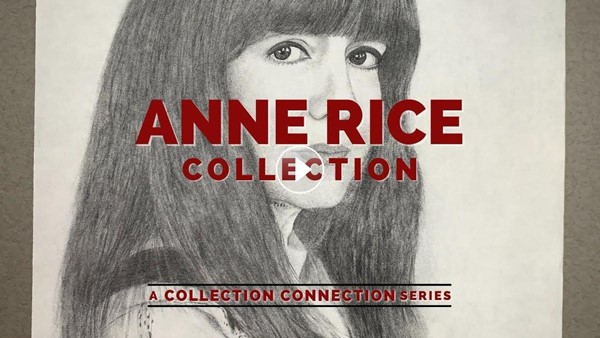