In this spring season of renewal, the Codex Tulane, or Códice Huamelulpan, has had a rebirth of its own. A mid-sixteenth century Mesoamerican painted manuscript on deer hide, the codex consists of inscriptions, pictorial and otherwise, likely used in court proceedings for land litigation.  Recorded pictorially is a mythological origin scene to begin the document followed by the genealogies of two ruling dynasties from the polities of Acatlán and Chila in the Mixtec-speaking region of Puebla in southern Mexico.  Handwritten glosses in Mixtec testify to a re-use of the Codex as a map early in the nineteenth century by citizens of San Juan Ñumí in northern Oaxaca to substantiate their claims in a dispute with neighbors over contested lands.

Made of delicate organic material, the codex needed conservation work due to a flex in the manuscript which led to pigment deterioration. Storing the codex by double rolling it in a small box initially made sense because of the sheer size of the document, which is over 12.25 feet long, and because it is somewhat curved when fully unrolled. This meant that a flat enclosure would be a serious challenge to construct but ultimately more appropriate for the item’s long-term care. Sabrena Johnson, Conservation Librarian, and Sara White, Conservation Specialist, recently took on this daunting project with the help of Dr. Christine Hernández, Curator of Special Collections at The Latin American Library.

After working with Chris to capture accurate measurements accounting for all the codex’s unique features, Sabrena and Sara designed and fabricated an enclosure with just the right supplies. “We could not order anything readymade online. We had to trust our gut on this one and engineer it from the ground up. You can usually build something like this in steps, measure the enclosure, and test the proportions of the piece down to the millimeter. However, this manuscript was just too large and unwieldy to check the fit while constructing the box.”

Now, the codex is stored lying flat with the appropriate support and can be displayed by flipping over the entire enclosure to view the back. The impressive protective enclosure requires several people to properly move due to its length and weight. “The codex is one of the crown jewels of Tulane’s collections, so our team invested the time and resources to ensure its proper care and longevity,” shares Sabrena.

View the codex on the Tulane University Digital Library. 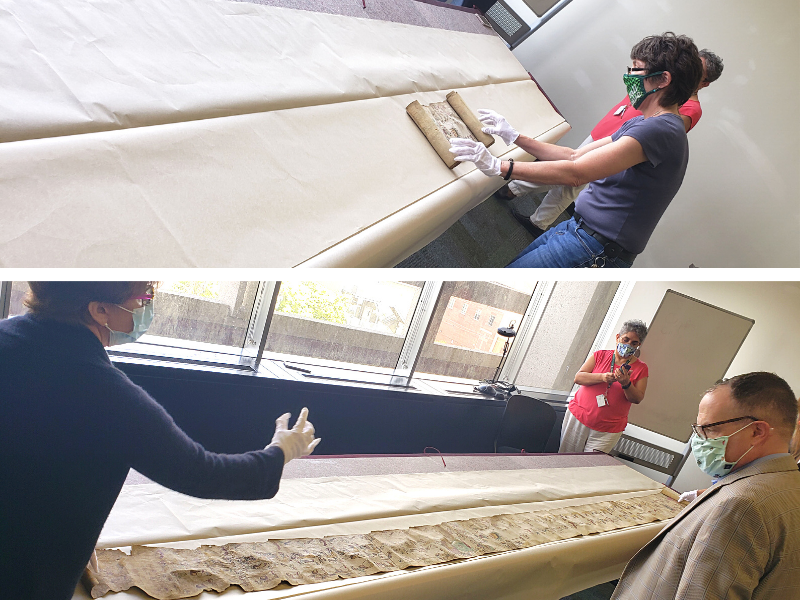