Vacations to far off destinations may be on hold this summer, but readers can travel back in time through The Lantern in Tulane University Libraries’ (TUL) digital library. Published weekly in New Orleans from September 1886 to November 1889, The Lantern was a short-lived newspaper devoted to the dissemination of “useful knowledge and beneficial information on all questions and interests of the people of New Orleans and vicinity, including politics, literature, art, science, as well as commerce and trade.”

The editors of The Lantern published once a week run to avoid printing articles from the Associated Press, which was a requirement for daily papers. This ensured that the paper concentrated on local news and politics, community events, and entertainment in town. Focusing a more intimate light on street life, The Lantern was unique in its depiction of the quotidian – the smell of sauerkraut in the Magazine market, a brawl between neighbors on Franklin Ave, the starvation death of a life-term prison inmate, and neighborhood frustration over uncollected trash.

Modern readers will note that the editors of The Lantern advocate for their version of justice – government corruption – without considering race or gender. Researchers will gain insight into social, racial, and ethnic relations throughout the city, as well as glimpses into the theatre district, prison life, local politics, and more. “Anyone who is studying New Orleans cultural history, Reconstruction in the South, or race studies and representations would be interested in exploring The Lantern to take a closer view of what life was really like at that time,” says lisa Hooper, Head of Media Services.

Media Services holds this and many more Louisiana and New Orleans based historical newspapers. Some are even printed in French, Spanish, Italian, and German, illuminating the diversity of different communities in the region. View all issues of The Lantern in our Digital Library and learn more about other Louisiana news sources via the TUL Library Guide. 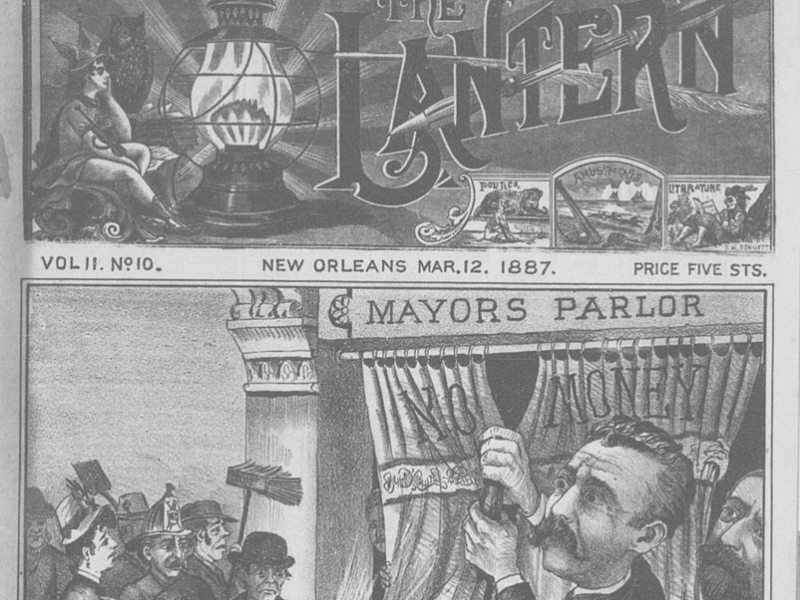