The Latin American Library celebrates the Day of the Dead

To commemorate Dia de los Muertos (Day of the Dead, November 1-2) each year, The Latin American Library (LAL) creates an Altar of the Dead to honor deceased friends and family members and celebrate their lives and legacies. The altar is dedicated to La Catrina (The Catrina), a character who has become the most popular representation of death in the collective imagination of Mexico. LAL librarians and staff were thrilled that people would be able to see the altar in person again and added a book display featuring materials from their circulating collections about the Day of the Dead and José Guadalupe Posada, the artist who invented the now iconic figure known as La Catrina.

Mexican caricaturist José Guadalupe Posada created La Catrina, or La Calavera Garbancera, in an engraving in 1913. The engraving portrays a skull with an elegant hat in the style of the finest European fashion at that time. Posada named her La Calavera Garbancera (sometimes translated as “The Dapper Skeleton”) in reference to the garbanzo vendors who, though poor, tried to rise to a higher social class by hiding their indigenous roots. The satire emphasizes that when we die, we all look the same as skeletons.

In 1947, the muralist Diego Rivera baptized her “Catrina” in his mural, “Dream of a Sunday afternoon in Alameda Park,” representing her as a full-body figure for the first time. The mural portrays important figures in the history of Mexico from a variety of time periods. La Catrina occupies a central place, with Rivera to her left and Posada to her right. Over time, the character has evolved to become the figure we recognize today as an iconic part of the Day of the Dead festivities.

The LAL displayed photographs of deceased friends and loved ones, either relatives or others who in some way, over the years, have contributed to the library’s work. In addition to images of the deceased, the altar also features traditional sugar skulls, marigolds, and sentimental offerings. While this holiday centers on death, it is not a solemn occasion. Rather, it is chance to poke fun at our own inevitable death, to express love, and to remind us that a person only truly dies when nobody remembers them. 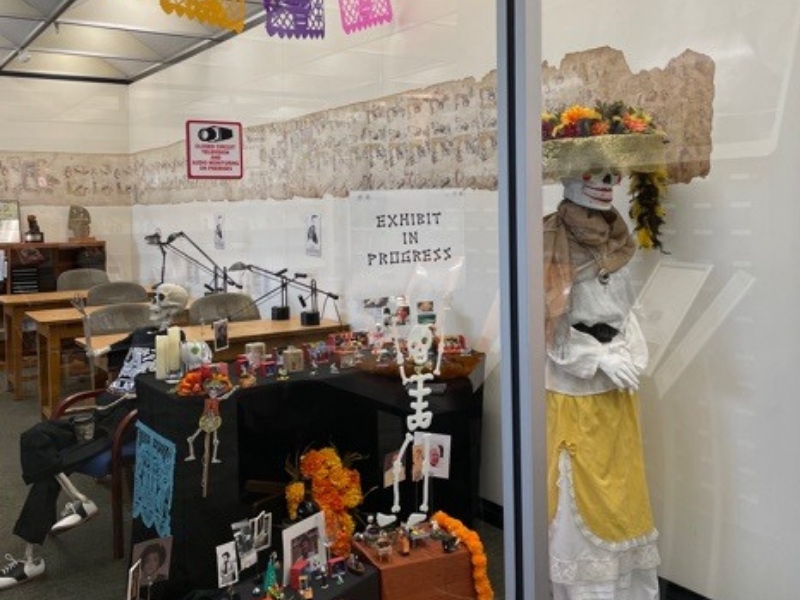