“I’m astounded by the range of interview subjects and topics that Goreau covered. There are even live music excerpts that she captured, such as Mahalia Jackson singing impromptu acapella verses of ‘His Eye is on the Sparrow’ at a 1971 press conference in Tokyo,” says Melissa A. Weber, Curator of the Hogan Archive of New Orleans Music and New Orleans Jazz.

CLIR funding also enabled digitization of interviews conducted in the 1980s by historian Lynn Abbott for his 2013 book, To Do This, You Must Know How: Music Pedagogy in the Black Gospel Quartet Tradition, co-authored by Doug Seroff. The Lynn Abbott interviews feature Black gospel quartet singers and practitioners in the South who both predated and enabled Jackson’s international success. This includes gospel performers such as Mary Thames Coleman, Reverend Paul Exkano, and Bessie Griffin; and New Orleans blues and rhythm & blues artists such as Chuck Carbo and Snooks Eaglin.

“Knowing that people around the world now have access to these recordings, many of which have not been heard for decades, is very exciting,” says Jillian Cuellar, director of Tulane University Special Collections. “Hearing intimate recollections of Jackson and her musical antecedents firsthand personalizes history for the listener, giving them the opportunity to interpret these stories without mediation.”

For more information about these collections, contact Melissa A. Weber, Curator of the Hogan Archive of New Orleans Music and New Orleans Jazz, at mweber3@tulane.edu or 504-247-1807. To learn more about Tulane University Special Collections, visit the TUSC website at library.tulane.edu/tusc, contact them at specialcollections@tulane.edu, and follow them on Facebook and Instagram. 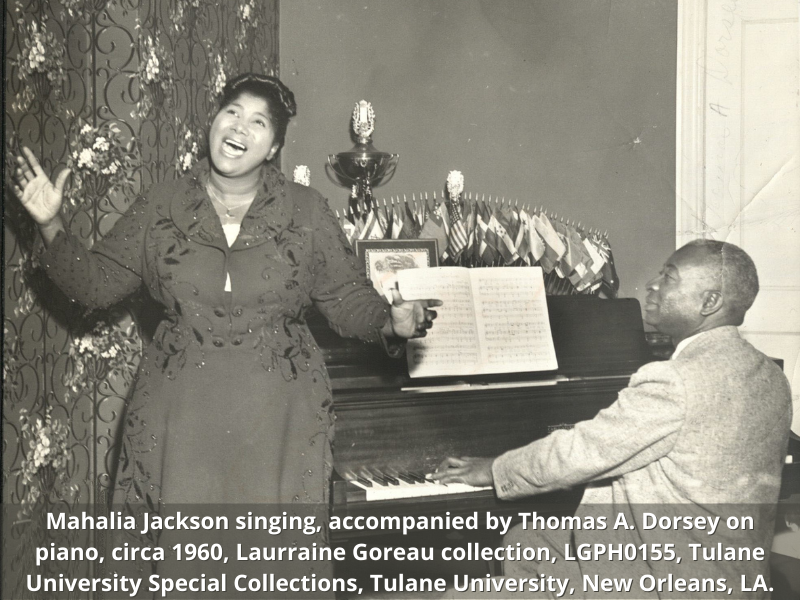