Skip to main content
homeAboutHurricane Katrina and the Library

Hurricane Katrina and the Library 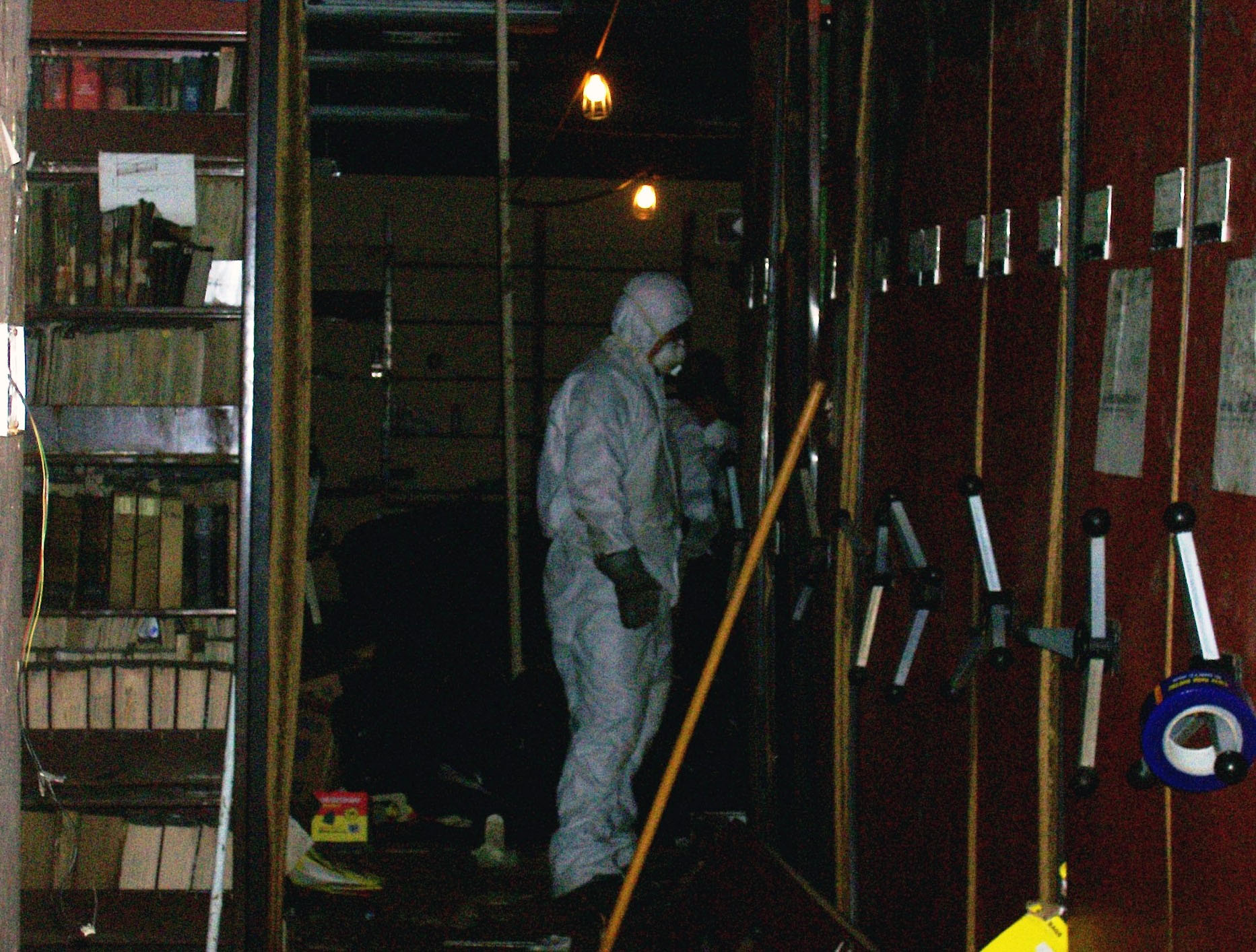 In the immediate aftermath of Hurricane Katrina in 2005 the ground level of the Howard-Tilton Memorial Library--an area about the size of a football field--was flooded by more than eight feet of water. The area housed a music library and very large collections of government documents, newspapers, microforms, and older books and journals. Jones Hall across the parking lot houses archival materials in the library's Tulane University Special Collections division and its lowest level filled with about four and half feet of water.

The flooding submerged about 1.5 million books and folders of manuscripts as well as an equal number of individual pieces of microform such as microfilm reels and microfiche cards. In the Howard-Tilton building alone about 750,000 of the library’s print volumes and media materials were underwater, as were its microform collections. Microforms in this case represented facsimile collections of rare works of scholarly interest and important documents.

In Jones Hall another 700,000 or so original manuscript folders and other archival items were flooded too. Most of these were part of the library's collection of Louisiana political papers, and the letters and personal papers of prominent local figures.

In those initial days after Katrina, both library buildings--especially the large Howard-Tilton main library--became ticking time bombs for their collections. Their deep basement lakes produced rapidly growing humidity while the loss of power shut off any circulating air. Being summer in New Orleans at the time, the interior temperature in these closed-off structures began to climb dangerously.  Mold is toxic to library collections and this was the worst-case scenario for a library disaster of historic scale.

While the entire city was evacuated and closed to all but military and emergency personnel, the disaster management company BELFOR was called to the scene within days for early reconnaissance, as part of Tulane's campus-wide emergency plan, and admitted past checkpoints established by the National Guard.  After the water receded from campus, BELFOR trucks navigated through surrounding downed trees and power lines to bring in a battery of huge generators and specialized equipment. Then, in both library buildings, engineers installed an elaborate series of giant tubes to pump hot dry air throughout each floor in danger.  A battle against humidity and mold was very quickly begun.

Initial attempts to drain the water from the library buildings were unsuccessful, as water from the still saturated ground outside would seep back in.  About four weeks after the storm, the groundwater table in the immediate area finally receded enough for water from the lower levels of each building to be removed.

BELFOR provided the work force, equipment, and expertise for the subsequent collections salvage and building climate stabilization operations, while our small team of library representatives onsite advised about which collections were priorities for salvage.

In the smaller basement of Jones Hall a successful effort was made to retrieve everything of value, more than 4,000 boxes of material overall.  These were archival collections comprised largely of historical manuscripts but also other primary source archival materials for research that included registration cards, newspapers, books, posters, matted prints and other art work, cartoons, photographs, lithographs, ledgers, diaries, journals, scrapbooks, and miscellaneous ephemera.

Once drained, the much larger basement spaces of the main Howard-Tilton building bore little if any resemblance to the same spaces pre-Katrina.  Furniture and in some cases shelving had floated to different locations.  Walls, floors, and all contents were coated with muck and slime.  This had become a foul, dank 40,000 square foot cave whose dark pathways through the debris were lit only by the occasional bare bulb from generator-powered utility lamps strung along yellow extension cords.  Face masks were mandatory and BELFOR workers used these dark and slippery trails to remove selected library collections in dark sacks that resembled body bags.

The Maxwell Music Library in the Howard-Tilton basement held more than 43,000 titles including books, scores, journals, CDs, LPs, and more. In general, the salvage operation overall was focused on our print materials, which had less chance of eventual replacement and a better chance for restoration. Amidst the soggy wreckage, more than 70 percent of the printed books and scores in the music library were salvaged for restoration. No recordings could be saved.

Nearby the Government Documents area held the largest amount of print material with well over 500,000 volumes. About 20 percent of this collection was salvaged, a selected portion of older print materials thought to be difficult to replace.  Nearly all of the salvaged government documents were trapped in compact storage units no longer functional and that had to be ripped apart to get at the soupy material inside.

A very large Microforms area on the north side of the basement held perhaps the richest collections of those flooded in the main building: more than 30,000 titles of facsimile collections of rare or scholarly material and newspaper archives.  Nearly 1.5 million individual pieces of microform in all.  Sadly, less than five percent of these materials could be selectively salvaged because of the damage that lengthy immersion in dirty water can do to microforms, especially in formats such as fiche or microcard.

Also salvaged for restoration from the Howard-Tilton basement were all 16,000 or so items from a "protected storage" area with compact shelving that housed a large number of important books in art and photography (including many catalogues raisonnes) and a backlog of several thousand other important printed works that had been awaiting original cataloging, since they were no commonly held by other libraries.

There were other areas of the Howard-Tilton basement where collections had been housed.  These included a second storage area with bound volumes of older science journals and a large area of open shelving adjacent to the Microforms area that had housed a varied mix of materials--such as newspapers, more government documents, geo-political reports, and books from the Howard Collection, which was one of the first library collections acquired by the university in the late 19th century.  None of those materials could be salvaged, given the wreckage and difficult conditions in those sections of the building.

While the upper floors in both library buildings, and the collections on them, were eventually saved from mold, each structure, especially the main Howard-Tilton building, sustained severe lasting physical damages.

Overall, more than 300,000 important print volumes, 18,000 reels of microfilm, and 629,711 archival items affected by the storm were salvaged and, remarkably, restored to useable condition through highly technical and elaborate processes.  The rapid response and salvage effort after the storm were examples of level-headed professionalism and logistical and technical expertise at a time when it appeared from media reports that nothing like this could be found in New Orleans in the wake of Katrina. (See more photos.)

These salvaged and restored materials were among the materials to be reintegrated into the library’s collections through a monumental effort called the Tulane Libraries Recovery Center, which was organized to process and temporarily house more than 1 million restored items, donations, and initial replacement purchases. (See below.)

The Howard-Tilton building and Jones Hall were miraculously reopened for that first, vital post-Katrina spring 2006 semester.

Ten years later temperature and humidity control in the main Howard-Tilton building was still being provided by an aging battery of temporary HVAC units, with air distributed throughout each floor by long semi-inflated tubes hung from the ceilings and attached through the windows along the back of the building to eight galvanized metal air distribution towers.

Today work has finally been completed on a large-scale building remediation project, the planning for which began soon after the library established the processes through it would steadily restore and rebuild its collections. The Howard-Tilton building today has a well-functioning, permanent HVAC system.

Howard-Tilton Memorial Library created a landmark undertaking called the Tulane Libraries Recovery Center to handle more than 1 million items from restoration, donations, and initial replacement purchases planned as a means to rebuild collections damaged or lost to Hurricane Katrina—principal research collections in the Louisiana | Gulf Coast region and relied upon by a host of users.

The Recovery Center was based at a space adjacent to Tulane’s off site library storage facility at 900 S. Jefferson Davis Parkway, about two miles from the university’s uptown campus. It directly addressed the exigent fact that each item restored or replaced needed processing similar to newly acquired items at a time when disaster-effected libraries were critically short on staff.

To rebuild the physical spaces destroyed as a result of Katrina's flooding, Tulane University developed a Hazard Mitigation and Build-Back Program with funding assistance from the Federal Emergency Management Agency (FEMA).  The program led to the construction of two additional floors on top of the existing Howard-Tilton Memorial Library building. This addition, completed in early spring 2016, houses elements of the library that were formerly located in its basement, as well as elements from the flooded lower special collections stacks level of Jones Hall.  The new floors provided replacement of lost library spaces as well as the replacement and relocation of the building’s primary mechanical and electrical systems, which were also destroyed.

The hazard mitigation component of the program was addressed by rebuilding the flooded spaces at a high elevation. The build-back component was addressed by reconstructing the same spaces for similar uses, adjusted in scale to accommodate modern building codes and regulations.  Discussions with FEMA about the project began in 2007 and a design phase with construction plans was finally approved in 2012.  The construction began in the fall of 2013 and included a special requirement that allowed the library to remain in operation throughout.  A library construction blog described the construction process in detail.