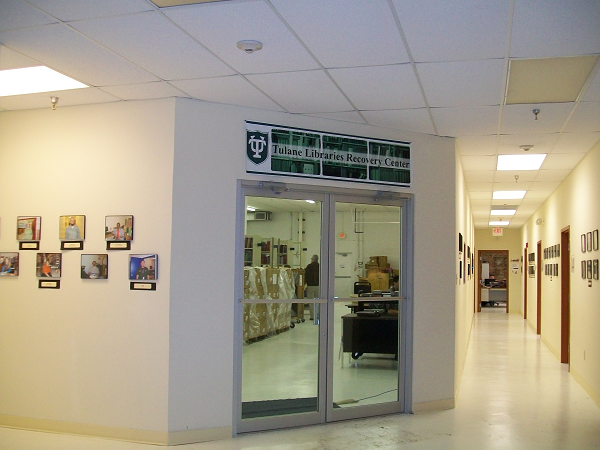 After Hurricane Katrina, Howard-Tilton Memorial Library created a landmark undertaking called the Tulane Libraries Recovery Center to handle more than 1 million items from restoration, donations, and initial replacement purchases planned as a means to rebuild collections damaged or lost  and that were important research collections in the Louisiana | Gulf Coast region and relied upon by a host of users.

The Recovery Center was based at a space adjacent to Tulane’s off site library storage facility at 900 Norman C. Francis Parkway, about two miles from the university’s uptown campus. It directly addressed the exigent fact that each item restored or replaced needed processing similar to newly acquired items at a time when disaster-effected libraries were critically short on staff.

Hurricane Katrina in August 2005 left the basement of the library's main Howard-Tilton building—an area larger than a football field—filled with more than eight feet of water. The basement housed a music library and very large collections of government documents, newspapers, and microforms. Jones Hall across the parking lot houses the library's Special Collections; its lowest level filled with about four feet of water. After the storm a major operation was quickly staged to drain these areas in order to salvage materials for restoration. Then the library’s monumental collections recovery challenges unfolded, most of them in uncharted territory.

Tulane was able to cover a portion of the the salvage, restoration, temporary lease, and processing costs associated with its Recovery Center with assistance from the Federal Emergency Management Agency (FEMA).  Indeed, by meeting directly with FEMA early on, the library secured promised assistance through a complex  array of interconnected FEMA project "work sheets" that functioned like grant outlines to address the Recovery Center's primary goals--ranging from materials processing to temporary storage.  Each project needed to conform to complex federal and state procedures and requirements.

Overall, in the Howard-Tilton building alone more than 750,000 of the library’s print volumes and recordings had been submerged underwater for more than three weeks, as were some 1.5 million individual pieces of microform such as microfilm reels or microfiche cards. In Jones Hall another 700,000 or so manuscript folders and other archival items also needed to be salvaged. No recordings could be saved and only a relatively small amount of microfilm (18,000 reels) could be recovered from title categories selectively chosen.  However, nearly all archival materials damaged were salvaged. So too was about 70 percent of the music library’s printed books and scores, along with important older government documents and foreign language materials that had been waiting to be cataloged.

The restoration process was handled by the disaster mitigation firm BELFOR at a technical facility in Ft. Worth, TX. BELFOR also conducted the initial salvage of these materials, which were selected by the library for restoration in September 2005 immediately after the storm. After the salvage operation, BELFOR began to thaw and restore the library’s salvaged materials at its recovery headquarters in Fort Worth, TX.  For printed material the remediation process involved unfreezing each salvaged item, washing its pages, drying to remove moisture, and radiation treatment to eliminate any residual mold.  Once the materials were individually allowed to thaw, they were identified and moved to a washing table.  Each print volume or document was carefully washed, page by page, with a gentle stream of filtered water and with a soft bristle brush or a foam brush if required.  Carts full of washed materials were then refrozen and later placed into a vacuum freeze-dry chamber, which used vacuum pumps to remove 99 percent of the air that is normally present in the atmosphere. The very low pressure level made sure that the drying took place by sublimation (ice changing to vapor without passing through the liquid phase) and that nothing dried by evaporation (liquid changing to vapor).  This reduced the degradation of the materials during the drying process while avoiding the waving and expansion that normally occurs when wet paper dries.

Microfilm was also packed and frozen at the salvage stage.  Once transported to Ft. Worth, the film was inspected and cleaned by hand.  Then it was reprocessed on a 35 mm microfilm processor using multiple rinse tanks.  After reprocessing the film was placed on new spools and then placed in light resistant black plastic boxes with new labels using information from the original.

Library Associates Companies (LAC), based in California, was the contractor that the library hired for its Recovery Center processing and cataloging operations through a competitive bidding process completed in Spring 2007. That summer, thousands of boxes of restored materials were returned by BELFOR to fill the Recovery Center’s freshly renovated warehouse where more than a dozen technical staff, most of them recruited nationally by LAC, quickly got down to business with direction provided by a small team of Howard-Tilton representatives.

The largest and perhaps most critical phase of the Recovery Center’s overall task was the processing of restored materials. This was also the very important process through which the library will be able to make a final determination as to exactly which of the collected works formerly housed in its storm-affected areas were lost and which were saved. This involved the physical handling of each item and two basic categories of work: (a) checking returned items against the library’s holdings to reactivate online catalog records while updating holdings information where needed and (b) basic sorting and inventory of restored uncataloged material such as manuscripts from Special Collections.

All restored materials were returned by BELFOR to the Recovery Center site in boxes shipped on pallets, generally 32 boxes per pallet and some 400 pallets in all. Several hundred thousand of these returning items would need to be checked against the library’s holdings to reactivate their online catalog records. The rest would need basic sorting, reboxing, and an inventory.

More than 110,000 returning items were government documents.  Others were music scores, music books or journal volumes, and books from a "protected storage" area and cataloging backlog.  Also returning with the restored materials originally salvaged from the Howard-Tilton building were more than 18,000 restored reels of microfilm--local newspaper and rare Latin American reels that had been selectively fished from the wreckage.

Restored material from Jones Hall included archival collections comprised largely of historical manuscripts but also other primary source archival materials for research that included registration cards, newspapers, books, posters, matted prints and other art work, cartoons, photographs, lithographs, ledgers, diaries, journals, scrapbooks, and miscellaneous ephemera. A total of 629,711 special collections items were restored to useable condition and reboxed.  A comparatively small amount of archival material was initially salvaged but could not be restored to useable condition, although these were returned to the library at its Recovery Center as well.

The processing of donations was a project phase of the Recovery Center that was more technically complex in that it required the items handled to be cataloged, including some original cataloging for items such as music scores. This needed a much higher level of expertise different from the processing of materials returning from restoration. The scale of the cataloging phase grew as the library added replacement purchases to the scope of work.  But many important donations were key to the recovery effort; among the first was a collection of some 2,300 mostly new art and photography books given to the library by Edwin Blair, a local collector. This was a much appreciated gift given the large number of similar art and photography titles that were effectively destroyed as a result of Katrina.

More than a hundred libraries and individuals across North America donated music books, scores and audio CDs-- some 20,000 titles in all. In 2010, Stan Levenson, a private collector based in Texas, donated to the recovery effort his enormous collection of more than 5,000 LPs, CDs, DVDS, VHS videos, books, and journals documenting a history of contemporary jazz from the 1940s through the early 1970s.   Rather than specifying that the materials be archived and preserved, he asked instead that it all become part of our general collections, to be used and borrowed by as many library users as possible.

Eventually, in the targeted priority area of music and media the library was able to build back a collection that today is much larger it was before the storm.

In an important milestone, the first initial batch of restored music books was delivered to the library from the Recovery Center in a small ceremony on Friday, March 14, 2008. Most of the library’s restored printed music books and scores were back on the library’s shelves, on schedule, by the end of that summer.  Projects at the Recover Center continued into early 2016.

Subsequent library building remediation efforts were directly tied to the need for spaces that would be required for the restored or replaced physical collections eventually coming back to the library.  This helped secure federal remediation assistance.

In summary, the Recovery Center was the foundation for a mammoth library rebuilding effort.